I actually had another blog post almost ready for today, but I decided at the last minute to hold that post for a few more weeks. So, when all else fails, as you know, one can always talk about the weather! 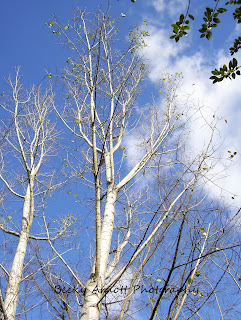 "Don't knock the weather; nine-tenths of the people couldn't start a conversation if it didn't change once in a while."
-Kin Hubbard

"If you don't like the weather in New England now, just wait a few minutes."
-Mark Twain

Although the quote above is credited to Mark Twain, you can find other variations of this saying in several other places in the United States.

For example, where I grew up in Southwest Virginia, I remember Daddy saying the same thing, except that he would refer to the area in which we lived instead of saying "New England."

Where Greg and I live now, in Tennessee, March, this year, came "in like a lion." It was ushered in with a violent thunderstorm. However, the good news for us, then, according to weather folklore, is that March should go "out like a lamb," with mild weather. (Mama also told us that the reverse would be true. If March came in "like a lamb," it would go "out like a lion.")

"March winds and April showers
Bring forth May flowers."
-Proverb

Here are some more neat old folk weather proverbs and sayings, many of which seem to have some truth to them. You might want to study them and see for yourself how accurate they are-

-"When smoke hovers close to the ground, there will be a weather change."
-"A ring around the...moon means rain or snow coming soon."
-"When leaves show their underside, be very sure that rain betides."
- "Dandelion blossoms close before there will be rain." 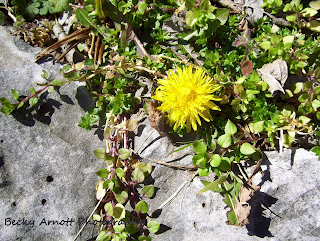 -"A sunny shower won't last an hour."
-"The higher the clouds, the better the weather."
-"If a cat washes her face over her ear, the weather is sure to be fine and clear."

"Weather is a great metaphor for life- sometimes it's good, sometimes it's bad, and there's nothing much you can do about it but carry an umbrella or choose to dance in the rain."
-Terri Guillemets

"Gentle spring's around the corner,
Waiting just to show her face
And bring us flowers and sunshine.
Winter's almost run his race."
-Gertrude Buckingham

Weather humor: "On cable TV they have a weather channel-24 hours of weather. We had something like that where I grew up. We called it a window."
-Dan Spencer

Positive thought: ..."I wish for you flowers and sunshine, gentle breezes and clear skies, calm seas and rainbows...(and) a life that's rich in adventure."-Mike Dooley, "A Note from the Universe"
Thanks for visiting! Until next Sunday, Becky

Email ThisBlogThis!Share to TwitterShare to FacebookShare to Pinterest
Labels: "March comes in like a lion.", "Notes from the Universe", "out like a lamb", Mark Twain, Mike Dooley, old folk weather proverbs and sayings, Southwest Virginia, weather folklore, weather talk