A scenic forty-five minute drive from our house is the unique town of Big Stone Gap, Virginia where I grew up.  A part of me will always be there largely due to my family's and my involvement with the June Tolliver House and the adjacent outdoor drama, "The Trail of the Lonesome Pine" (which is based on a novel of the same name by author John Fox, Jr). 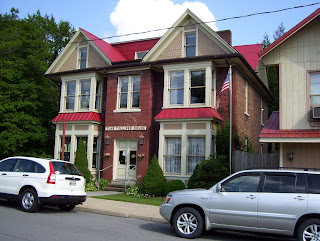 As it states in the Tolliver House/drama brochure, "The heroine of "The Trail of the Lonesome Pine" actually lived in the (June Tolliver) house...while attending school (in Big Stone Gap).  See the restored 19th century furnishings of the parlor, June's bedroom and the John Fox, Jr. Memorial room." 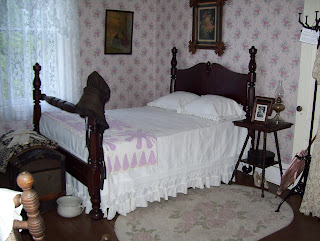 Be sure to browse through the gift shop in the Tolliver house which features items such as paintings, wood crafts, corn shuck dolls, as well as other mountain handicrafts made by the people from the Appalachian Mountain area, and local books. 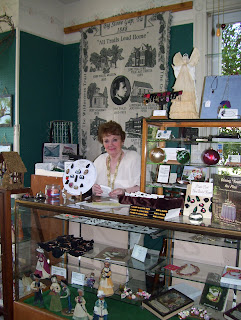 Barbara Polly, pictured here in the gift shop, is the executive producer and a powerhouse behind the       tremendous success of both the Tolliver House and the drama.

On a personal note, I have prints of some of my art work and coal jewelry and magnets for sale in the shop.  Before me, my grandmother, Mema (Fannie H. Botts) used to sell her lovely hand-painted plates featuring images of the Tolliver House as well as other subjects. 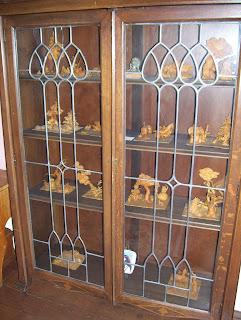 In another part of the house are my original wax sculptures depicting various scenes from my imagination such as ice skaters on a pond. In the parlor, are portraits which were done by my mother Jean Botts of people who were involved with both the Tolliver House and the outdoor drama. 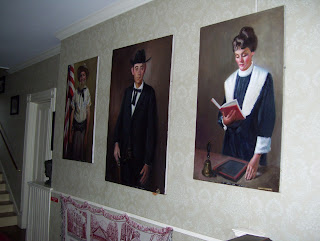 There are several paintings on display throughout the house, mostly portraits of the characters from "The Trail of the Lonesome Pine" outdoor drama as well as a portrait of John Fox, Jr., himself, which were painted by my father Bill Botts.

When I was a teen, I felt fortunate to be one of the original June Tolliver Debs.  As a Deb, I enjoyed taking people on tours of the house while dressed in period costume.  As a tour guide, I especially liked people's reactions as I related a couple of stories which I'd heard about the ghosts that supposedly dwelled there.  (In fact, around that same time, my brother Nick took a picture of the outside of the house in which a large ghostly figure appears to be in one of the windows! The image in this now locally famous photo is often referred to as the "June Tolliver ghost.")

Now, adult volunteers work in the gift shop and take visitors on tour of the Tolliver House. 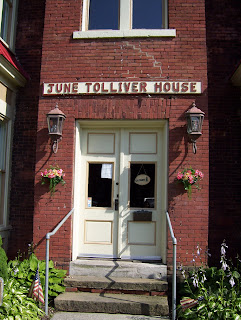 The June Tolliver House is a fantastic place to visit.  It would be well worth your time!

And, in addition, check out the official state drama of Virginia, "The Trail of the Lonesome Pine," which I'll discuss in more detail on my blog post next Sunday.

Positive Thought: Enjoy being a volunteer (like for the June Tolliver House!)

Thanks for visiting!  Until next time (Sunday, July 31), Becky
Posted by Becky Arnott at 3:45 PM